This is Saturday, Isn’t It??

Have you ever had some days when everything you had planned didn’t happen and lots of stuff you didn’t plan did happen?  Then after all that going around you have no idea what day it is??  That’s been the last several days and all day I’ve had to remind myself that yesterday was still Saturday.

Friday was an important day, because Carole at From My North Carolina Home Blog, released Part 2 of her Autumn Jubilee Quilt Along.  I’m behind, but if things settle down, it shouldn’t be hard to catch up.

From My Carolina Home’s Blog

Then Saturday morning at 8:00 AM EDT, Project Linus Mystery Quilt Challenge released Clue #5.  Whoop! Whoop!!  Two very cute blocks – a Koala Bear (which isn’t a bear, you know) and a Penguin (which is a flightless bird – it’s wings are more like flippers for swimming).  Both are appliqué , and you know that’s not my favorite technique, but these are going to be quick to make. We are having fun Exploring the World with Ethan! [It’s not to late to join us!] 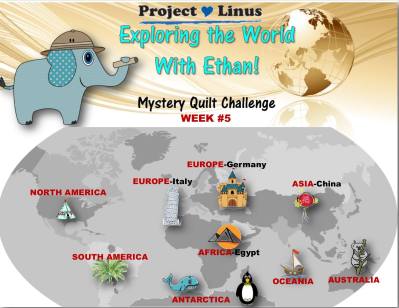 This past week I was able to pick up my Choo Choo Quilt from Prints Charming Quilt Shop.  They have recently begun offering long arm service.  She did a beautiful job.  I will be working on Binding and Labeling it this week.

Choo Choo Quilt home from the quilter and ready for binding & adding a label.

Blocks 7 & 8 from the I Wish You a Merry Quilt Along were released last Tuesday. I’ve been saving the patterns and working on blocks when I have time and I was able to make Block 7. The pattern is a Poinsettia and is suppose to have a yellow center, but I kind of like it plain or I may add a button?

I Wish You a Merry QAL – Block 7, Poinsettia

Yesterday I did a few little projects in the kitchen. The first thing I made was some Grape Nuts Raisin Muffins.  I’ve had this recipe for some time.  It says it makes 12 muffins, but I make them a little smaller and got 18.  I like them plain or with a little butter and cream cheese would be nice.  They aren’t sweet and are great for breakfast or just plain snacking.  Here is a link to a similar recipe for Low Fat Muffins from Kraft. It references “wheat & barley cereal nuggets,” which translates to Post Grape Nuts Cereal.  This is the one with tiny, crunchy bits, but in the notes they give a substitution of flake cereal. 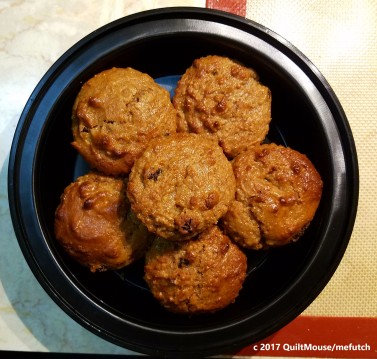 I got a new kitchen appliance earlier this month – a Power Pressure Cooker XL It’s been a long time since I used a Pressure Pot and that one was on the stovetop.  I’ve been following a Facebook page dedicated to users of this pot, browsing the Internet and downloading a number of Kindle cook books.

I’ve made Beef Stew (learned to add frozen vegetables at the end unless you don’t want to see them), and used it as a slow pot to cook up the remains of a rotisserie chicken before deboning it.

Yesterday I did two more recipes.  First I Hard Boiled some eggs – ok, that’s not really a recipe.  I used the 6-6-6 Recipe. 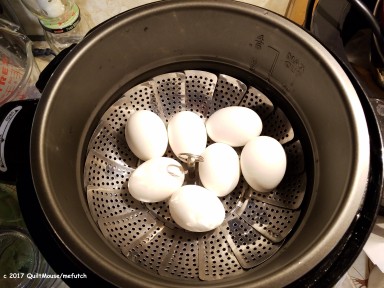 I placed 1-1/2 cups water in the bottom of the pan, set my vegetable steamer basket in the bottom  and then added 8 large eggs. (Ok, there is only a picture of 7, I had already peeled one.) I selected 6 minutes (the Rice button automatically selects the time 6 minutes).  Once it was pressurized it cooked 6 minutes and then switched to warm.  I timed 6 more minutes and then forced the release of the pressure.  Once it was safe to open the lid, I removed the basket & placed the eggs in a bowl of cold tap water that I had added ice to when I started the pot.  So 6 minutes cooking, followed by 6 minutes of pressure release, and ending with 6 minutes in a cold bath.  I peeled one egg and the shell came off beautifully.  I wasn’t ready to use the eggs so I stored the unpeeled eggs in the fridge. (Unpeeled eggs will last longer in the refrigerator than peeled eggs.)

Next I wanted to make some Orange-Cranberry Sauce.  I love this and my favorite store bought is no longer available.  I have a good supply of cranberries in the freezer so I pulled a bag out to try making it in this pot.  Searching the Internet, I found this recipe for Pressure Cooker Cranberry Sauce.

My Power Pressure Cooker is the 6 quart size. The 12 ounce bag of cranberries barely covered the bottom of the pan.  Once I play with the recipe, I will definitely be able to double and triple it and freeze it.  I only got one jar out of this recipe.

I used Maple Syrup, Freshly squeezed Orange Juice, and the Zest of  one Orange. I also added about 1/2 teaspoon of grated ginger. My pot does not give me the option of setting 1 minute cooking, so I selected Vegetables/Steam which has a time of 2 minutes.  I watched the pot and once 1 minute passed I switched it to warm. Once the pressure was naturally released for 7 minutes, I stirred it well, because I like it only slightly lumpy.  The recipe suggests a range for the sugar, so I started out with the least amount.  It was good hot, and we’ll see if it needs more.

Next time I make it I will probably add a cinnamon stick (or two) and play with the amount of ginger. I like it spicy.

Do you have an Instant Pot or Electric Presser Cooker?  What do you like to make in it? I’m open to learning new recipes.

I am retired. I love to quilt. I make charity quilts as well as quilts for my friends & family.
View all posts by Quiltmouse →
This entry was posted in Food, Project Linus, Quilting and tagged Presser Cooker Recipes. Bookmark the permalink.

2 Responses to This is Saturday, Isn’t It??

This site uses Akismet to reduce spam. Learn how your comment data is processed.